Self-harm is the conscious, purposeful destruction of one’s own body. It is intentional self-inflicted abuse. Self-harm is different from attempted suicide, because the intention of the harm is not to commit suicide. Usually self-harm starts in the adolescent and early adulthood years. Self-harm can turn into a habit that some have great difficulty in stopping.

Self-harm is often linked to an experience of trauma and is described by self-harmers as a way to relieve stress, decrease “numb” feeling, and many other reasons. Other terms for self-harm include self-injury and self-mutilation. Cutting is the most common form of self-injury, but self-injury encompasses all forms of self-violence, such as burning, scratching, hair-pulling, or ingesting harmful substances.

Trails Carolina is a wilderness therapy program for teens, ages 10 to 17, struggling with various issues, such as self-harm, depression, anxiety, and many more. At Trails, we combine wilderness therapy, family therapy, individual therapy, and equine programming to give holistic and full treatment to 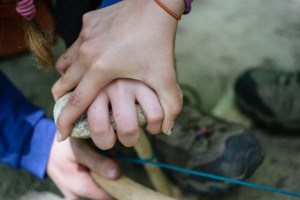 Our clinical foundation includes improving self-awareness, emotional regulation, interdependence, and transference to ensure success in our students. Each child in our program gets an individualized treatment plan that is carried out by experienced and caring staff.

“Self-injury may be linked to a variety of mental disorders, such as depression, eating disorders and borderline personality disorder.” –Mayo Clinic

In a study published by the Lancet and conducted by the Center for Adolescent Health at the Murdoch Children’s Research Institute along with a few other institutes, they found that about 1 in 12 teens self-harm. This is an alarming number, but 90 percent of teens that self-injury grow out of it. That still leaves 10 percent that continue to struggle and self-injury though.

In a study directed by the Cornell University Research Program on Self-Injury and Recovery, they reviewed various studies about the prevalence of self-harm among various groups of people. It’s often thought that girls self-injure more than boys, but in the review researchers found that in many studies boys were just as likely as girls to self-injure, but boys oftentimes use different techniques, such as getting in fights with the intention of getting hurt.

In a report by Hollywood Life, they discussed Cara Delevingne’s battle with depression and self-harm. Cara spoke about how she fell into serious depression in her mid-teen years and as a result began self-harming. Though she still sometimes struggles, it’s not nearly as bad now and she doesn’t self-injure anymore.